Myotonic Dystrophy and the Eye

The eye is badly affected by myotonic dystrophy and the symptoms can include: droopy eyelids, weakness in the eye muscles, weepy eyes, low eye pressure, and damage to the retina at the back of the eye.

The lens of the eye, however, appears to be particularly sensitive to the effects of myotonic dystrophy and the early appearance of cataract is one of the most common and reliable symptoms of the disease. In the general population cataract is most frequently associated with older people and more than 80% of people over the age of 75 years have cataract. In DM, however, cataract can occur at a much earlier age and can even appear in the lenses of teenagers. In many individuals with DM the presence of a cataract may be the only obvious symptom of the disease and it is, therefore, important for ophthalmologists to be aware of the possibility that DM may be involved, particularly if there is a history of cataracts in the family.

The lens of the eye is normally crystal clear so that it can focus what we see onto the retina at the back of the eye, in much the same way the lens of a camera focuses images onto the film. In cataract this perfect clarity is disturbed and opaque white patches develop in the lens preventing the formation of clear images. If not treated, cataract can cause total blindness in the affected eye. In its early stages DM cataract is very unusual in appearance and has frequently been used as an early diagnostic indicator.

Typically the cataract first appears in the outer layers at the back of the lens as very fine dust-like particles that can have a brightly coloured appearance (Picture 1). At this early stage, it is often called a Christmas tree cataract because of its resemblance to the coloured lights on a Christmas tree. As the cataract develops, however, the number of particles increases and larger spokes and star-shaped white regions appear which cloud the lens and eventually form a mature cataract (Picture 2) which is indistinguishable from other more common types. Cataract is also a feature of DM2 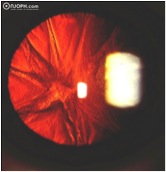 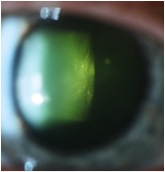 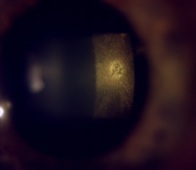