Myotonic Dystrophy (DM1) has well known effects on muscle and is known to lead to cataracts, diabetes, and sleep problems in some. It has also long been recognised that children severely affected at birth will often have learning difficulty. There may also be changes in the personality of some adults but until recently it has been unclear whether the disorder directly affects the brain.

The past: The personalities of people with DM1 have been described in rather unhelpful terms such as ‘socialisation difficulties”, “apathetic” or “lethargy”. These rather imprecise labels do however reflect the experiences of some people with the condition and their families. Psychological tests had identified some changes but it was not clear why these happened.

The interpretation of these observations was complicated by many factors:

• People may become depressed or withdrawn when coping with a progressive and long term disorder and this will influence the results of psychological tests;

• Drug treatments for many conditions and in particular antidepressants may have an influence on personality and the results of the tests;

• Sleep is often disturbed and of poor quality leading to day-timetiredness. This will have an effect on any test results;

• The tests themselves may take hours to complete requiring concentration to be maintained – very difficult for all of us especially after a poor nights sleep;

• The weakness of muscles of the face may give rise to a somewhat ‘dopey’ appearance and this may have influenced how people were approached and treated. It may also have led to assumptions about how alert people were.

Recently undertaken research has combined scans of the brain with pathological studies of brain and carefully undertaken psychological testing. Researchers have also attempted to take into account the issues discussed above. These studies have provided clear evidence that DM1 affects the brain.

MRI scans do show changes in the wires connecting parts of the brain. This is referred to as the white matter and changes are seen in some specific areas concerned with drive and initiative. These changes:

• Evolve with passage of time.

• Show some relation to the mutation size.

There is accumulation within cells of some structural proteins (including one called “tau”). These are important in maintaining the structure of the wires connecting nerve cells. It has been suggested that there is an abnormality in the regulation of production of tau in DM1.

• Facial emotional recognition deficit – an inability to work out what people’s facial expressions may mean.

These changes were however much less striking than in many prior studies and the researchers did not find a good correlation between these changes and MRI scan appearances. They did however feel able to identify psychological abnormalities in the population.

It is now accepted that Myotonic Dystrophy can directly affect the brain. There are well described changes in structure which are visible on scans. The mechanism by which these changes relate to the changes in personalty seen in Myotonic Dystrophy remains to be sorted out and is the subject of ongoing research.

(A summary of a talk to the MDSG 2012 Conference by Dr Richard Petty, Neurologist at Southern General Hospital, Glasgow, and Clinical Lead for the Scottish Muscle Network) 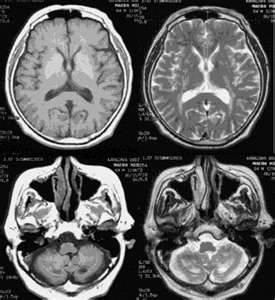 A Generic MRI Scan of the Brain.